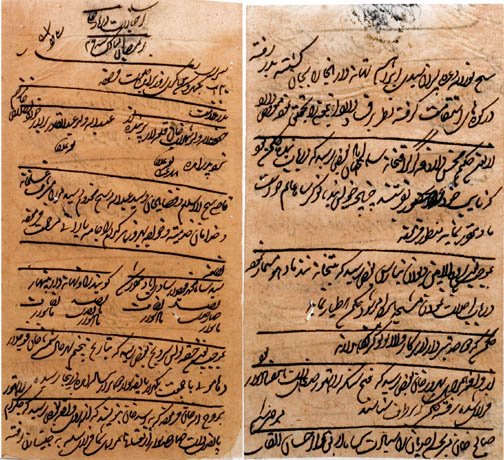 42. Demolition of Bindu-Madhav Temple at Banaras.

“Complying with the orders, Rafi-ul-Amin, the Diwan of Banaras has sent the report that the Temple of Nand-Madho (Bindu- Madhav) has been demolished, and, after this affair, awaits whatever orders are given regarding constructing a mosque there. The Emperor ordered that a mosque be built there.”

Temple of Bindu-Madhava – “the most important Vishnu Temple in Varanasi since the fifth century A.D., finds mention, along with Adi Keshava, in the Matsya Purana, as one of the five most important tirthas in Varanasi. It was demolished during every inconoclastic storm and was every time rebuilt.” The deity was reconsecrated in a grand Temple built by Raja Man Singh of Amber in the 16th century. The Temple was demolished and a mosque was constructed here as the Akhbar of R.Yr. 26, Ramzan 20 / 13 September 1682, displayed here, records.

The present Temple was built by the Raja of Aundh (Satara, Maharashtra) in the 19th century. The Temple is highly respected among the South Indians; Bindu-Madhava is respected as Vishnu-Kanchi of South India. A large number of devotees visit the Temple, especially in the month of March.

The above Akhbarat should put to end all doubts and controversy about the destruction of temples in Banaras on Aurangzeb’s orders.