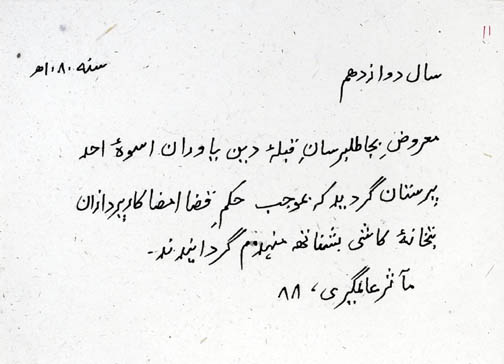 22. DEMOLITION OF THE TEMPLE OF VISHWANATH

Demolition of the Temple of Vishwanath (Banaras). August 1669 A.D.
It was reported that, “according to the Emperor’s command, his officers had demolished the Temple of Vishwanath at Kashi.”
(Maasir-i-'Alamgiri, p. 88)
Commentary:
Kashi is one of the most sacred towns in India and reference to the worship of Shiva as Vishveshvara goes back to very early times. Kashi itself enjoys highest sanctity since times immemorial. According to the Puranas, every foot-step taken in Kashi Kshetra has the sanctity of making a pilgrimage to a tirtha. Lord Vishvanatha is regarded as the protector of Kashi and the belief is that one earns great religious merit by having darshana (view) of the deity after having bathed in the Ganges. After destruction of the Temple on Aurangzeb’s orders, a mosque was built which still stands there as a testimony of the great tolerance and spirit of forgiveness of the Hindus even towards those who had for centuries desecrated and destroyed their Temples and other places of worship and learning, and also as a lesson that “mutually uncongenial cultures”, when forced by circumstances to intermingle in the same Geographical area, result in such calamities. A portion of the sculpture of the demolished Temple, probably built in the late 16th century, still survives to tell the tale of Aurangzeb’s vandalism and barbarity. The present Temple of Vishveshvara was built by Ahilya Bai Holkar of Indore.