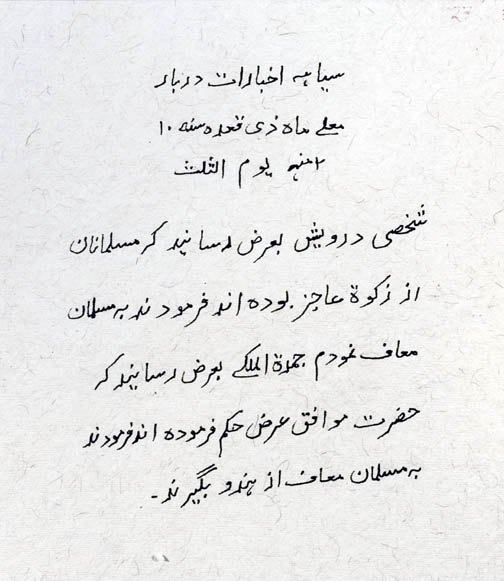 “A darvesh brought to the notice of the Emperor that the Musalmans (of the country) felt dejected on account of (the burden of) Zakat and that they should be exempted from paying it. Jumdat-ul Mulk now sought the Emperor’s orders regarding the matter. The Emperor (Aurangzeb) ordered that the Musalmans were to be exempted from paying it, but it should be charged from the Hindus.”
Siyaha Akhbart-i-Darbar-i-Mu‘alla,
Julus (R.Yr.) 10, Zilqada 2 / 16th April 1667.
Commentary:
Here the word Zakat has been used for custom duty charged on all commodities brought for sale. J.N. Sarkar (Aurangzeb, Vol.III, p.181) is right in saying that it must not be confounded with the Zakat or tithes which all Muslims had to pay as per the Quranic injunction and was meant to be spent on the Musalmans alone. When the Muslims were found to be misusing the concession, they were made to pay at half the rate of what was charged from the Hindu traders.