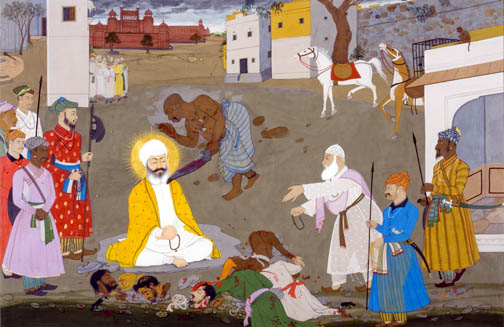 The martyrdom of Guru Tegh Bahadur, the ninth Guru, in 1675 is a major event in the Sikh history. It led to the creation of Khalsa in 1699 by his son Guru Gobind Singh; the creation of Khalsa is considered as a watershed in the history of the Sikhs. Guru Tegh Bahadur was born in 1621 to the sixth Guru Hargovind (1606-45), who was the first to arm the Panth to defend it from the oppressive Mughal rule and to help the weak and the needy. He was followed by Guru Har Rai (1645-61) who incurred displeasure of Aurangzeb for having blessed Dara Shukoh, then passing through Punjab after losing the War of Succession.
Guru Tegh Bahadur accepted the mantle of Guruship in 1664 after the death of the eighth Guru Har Kishan at Delhi. Sooner or later he was bound to invite hostility of Aurangzeb who had summoned the two previous Gurus as if he had the right to arbitrate in the succession for the Guruship. He travelled extensively, spreading his message of hope and courage to the scattered sangats and encouraging all to bear their tribulations. The surviving hukam-namas show the high regard in which he was held by his followers. In 1668 or so, he accompanied Maharaja Ram Singh of Amber (Mirza Raja Jai Singh’s son) to Assam where he participated in the Mughal campaign. After returning from there he took his residence at Makhowal (Anandpur) where in about 1675, he received a deputation of the Brahmins of Kashmir who narrated to him harrowing tales of their oppression and forcible conversion in Kashmir. Gradually Guru Tegh Bahadur was drawn into the whirlwind which Aurangzeb had raised by his policy of Temple destruction, conversions and discrimination against the non-Muslims. Along with the Temples, Gurudwaras were also razed. Guru Tegh Bahadur, who had all along called upon others to fight against oppression and injustice, and for freedom of conscience, now came out openly against Aurangzeb’s policies and encouraged the resistance of the Hindus of Kashmir against forcible conversion to Islam thereby carrying out Guru Nanak’s injunction that “righteous people must defy and resist tyranny.”
Guru Tegh Bahadur was taken to Delhi and cast into prison. After he and his three companions refused to embrace Islam, they were brought to the Chandni Chowk near the Red Fort where his companions were tortured to death in his presence to intimidate him, but on his firm refusal to abjure his faith at any cost, he was beheaded “in a large public spectacle” on 11 November 1675. Guru Tegh Bahadur preferred to give his head but not his honour. The Guru’s martyrdom deeply influenced his son Gobind Singh’s mind and it is believed to be one of the main reasons for his founding the Khalsa in 1699 which made every Sikh a potential warrior against oppression and religious persecution and led to a most dramatic change in the Sikh Panth.