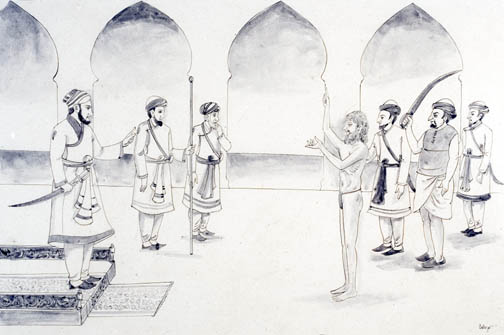 4. AURANGZEB ORDERS THE EXECUTION OF SARMAD

Sarmad was a well known saint who came to Delhi towards the end of Shah Jahan’s reign. Prince Dara Shukoh, the eldest son of Shah Jahan and translator of the Upanishads in Persian, sought his company and gave him much respect due to a saint and philosopher.
Sarmad was disliked by the Mullas for his unorthodox views and free-thinking. He used to say that whosoever had realized the God, annihilates the distance between him and the Supreme Reality, i.e. remains constantly in communion with the Divine. When he said that “while the Mullas say that the Prophet ascended to the heaven but Sarmad declares that the heaven came down to the Prophet,” he meant that the highest state of bliss is attainable in this very life. He generally remained in the nude state and had acquired knowledge of the highest non-dualism. When summoned to the court and asked to repeat the Kalimah, he only went so far as to declare that there is no God, saying that his realization went no further: he saw the non-difference between the individual soul of every one and the Supreme Soul. The Mullas decreed that he must be put to death for apostasy. When the executioner came with his axe to cut off his head, Sarmad welcomed him with the words, “I know You, in whatever form You come,” and embraced death for the sake of his views and freedom of conscience.
The sketch above shows Sarmad in the Emperor’s court, the executioner waiting to perform the hateful task.