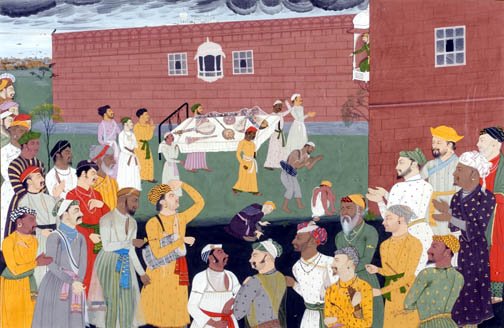 In 1665 and in subsequent years also Aurangzeb issued a number of orders to enforce the rules in confirmity with the Shariat, such as dismissal of court astronomers and poets, prohibition of Tazias, restriction on assembling of pilgrims, prohibition of music at the court, discontinuation of the Jharokha darshan etc. Khafi Khan writes that “distinguished and well-known musicians in the service of the court were forbidden to perform (in the court)” and general orders were issued for the prohibition of music and dancing. As a mark of protest the musicians, accompanied by a large crowd, “prepared a bier with great dignity and carried it to the foot of the Jharokha window, wailing in front and behind the bier.” When the Emperor enquired about the funeral, the musicians said, “Rag (Music) is dead, we are going to bury it.” Unfazed by the polished satire, he replied, “Bury it so deep that no sound or echo of it may rise again.”
Aurangzeb’s puritanism and orthodoxy accompanied him to his grave but the Rag lived on triumphantly.
In the painting above, the artist has shown the musicians, wailing and lamenting, carrying the “bier of music” in Aurangzeb’s presence.