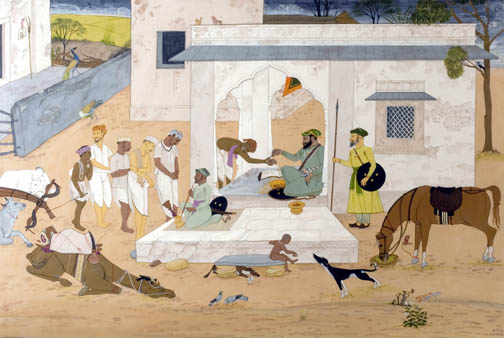 28. HINDUS FORCED TO SUFFER HUMILIATION IN PAYING THE JIZYAH TAX

On 2nd April 1679, Aurangzeb re-imposed Jizayah upon the Hindus which had been abolished by Emperor Akbar in 1564. The author of Maasir-i-Alamgiri writes: ‘As all the aims of the religious Emperor (Aurangzeb) were directed to the spreading of the law of Islam and the overthrow of the practices of the infidelity, he issued orders … that from Wednesday, the 2nd April 1679/1st Rabi I, in obedience to the Qur’anic injunction, “till they pay Jizyah out of their hand and they be humbled”, and in agreement with the canonical traditions, Jizyah should be collected from the infidels (zimmis) of the capital and the provinces’.
The economic burden of Jizyah was felt most by the poor who formed the vast majority of the Hindus; for the middle classes and the rich, it was not so much the economic burden which mattered but the humiliation involved in the prescribed mode of payment, which the Jizyah collector could always insist upon, as of right i.e. by insisting that he would accept it only when paid personally. The Qur’anic injunction that war must be made upon all those who do not profess Islam “till they pay Jizyah out of their hand and they be humbled”, was interpreted to mean that the Hindus must be made conscious of their inferior position when paying this tax.
In the painting above, a number of Hindus, both rich and poor are lining up to pay Jizyah while the arrogant Jizyah collector is picking up the coins from the palm of a Hindu Jizyah payer. Some people have come from the neighbouring areas in their bullock-carts; their bullocks are resting under the shade of the trees.