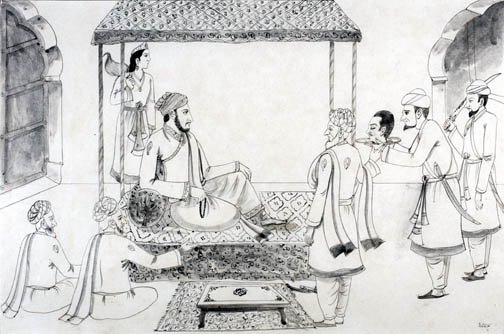 Crown Prince Dara’s immense popularity and sympathy for him among the masses was evident when he along with his young son was taken out on the streets of Delhi on the 29th August 1659 in a degrading manner (Exhibit No.3). The outburst of popular sympathy for Dara Shukoh and the contemptuous and sullen response which Aurangzeb had received from the people for his outrageous behaviour with his elder brother filled his dark heart with misgivings if Dara remained alive even as prisoner in the Gwalior fort or elsewhere. It was felt among his inner circle of confidants that Dara must be put to death without delay on the ground of apostasy.
Following a farcical trial in absentia, the Ulama in pay of Aurangzeb decreed death for Dara for his infidelity and deviation from Islamic orthodoxy, and because “the pillars of the Canonical Law and Faith apprehended many kinds of disturbances from his life.” This was in reality a fraud on truth.
Prince Dara Shukoh was murdered and his severed head was sent to Aurangzeb to satisfy him that his rival was really dead. By his orders, the headless corpse of his brother was placed on an elephant and paraded through the streets of Delhi a second time and then buried without the customary washing and dressing of the body. The sketch above portrays the trial of Dara in absentia and his severed head being brought before his brother, Emperor Aurangzeb.