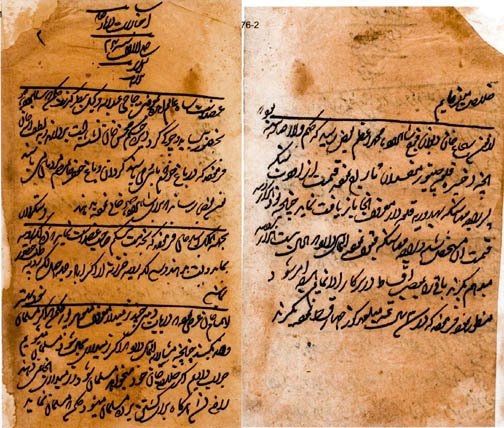 37. COERCION IN CONVERSION: CASE OF THE CHIEF OF MANOHARPUR

“Darbar Khan was ordered (by Emperor Aurangzeb) to send a parwanah to Ihatmam Khan, Kotwal of Garhvitli (at Ajmer) instructing him that if Devi Chand, the dispossessed Zamindar of Manoharpur, who is in prison, becomes Musalman, so much the better for him. or else he is to be killed."
What happened subsequently in this case is further known from Siyah Akhbarat-i-Darbar-i-Mu'alla of R.Yr. 24, Jamadi I, 12 / 21st May 1681 (Exhibit No.37), which says ‘… when it was conveyed to Devi Chand, the dismissed Zamindar of Manoharpur, that either he became a Musalman or he would be put to death in compliance with the Emperor’s orders, he requested that if Zamindari of Manoharpur was restored to him, he would become a Musalman. Upon this, Ihatmam Khan replied, “If you desire to live, you have to become a Musalman; (even then) the Zamindari (of Manoharpur) will not be given to you.” He did not agree to it. He was then taken for execution where he agreed to become a Musalman. The Emperor ordered, “Make him a Musalman.”
Siyaha Akhbarat-i-Darbar-i-Mu‘alla,
Julus 24, Jamadi I, 7 / 16th May 1681.
Commentary:
We do not know the ground on which Devi Chand Shekhawat was dispossessed of his estate of Manoharpur, in erstwhile Jaipur state, but the case provides a very questionable but convincing case of the use of coercion in conversions.