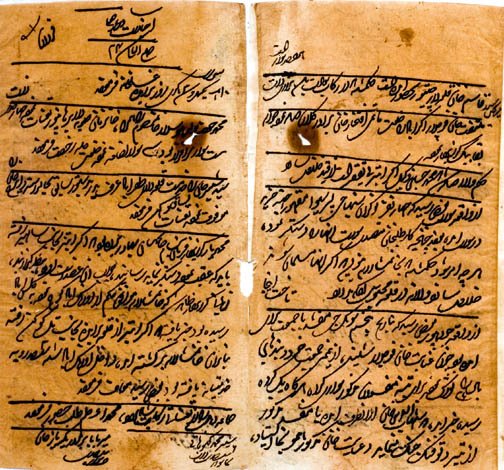 “Report was received from Surat that four servants of Shambhaji, the son of maqhur (vanquished) Shiva, had come to Surat for making purchases, whereupon Kartalab Khan, the Mutsaddi of Surat, arrested them.
The Emperor ordered that if they turn Musalman, set them free; presently confine them in the prison of the fort.”
Siyaha Akhbarat-i-Darbar-i-Mu‘alla,
Julus (R.Yr.) 24, Jamadi II, 10 / 17th June 1681.
Commentary:
There are many other such instances of an alien religion being forced upon the Hindus. The Court Bulletins (Akhbarat) of Aurangzeb have recorded many more such cases. Thus, see Akhbarat R.Yr. 10, Zilhijja 3, Zilhijja 12; R.Yr. 23, Shaban 22 (each convert given Rs.1000/-); Julus 24, Ramzan 8; Julus 25, Ramzan 23, etc.
In each case we find that the convert is being awarded naqd or khil‘at (as a mark of honour), usually both, in many cases Qanungoship, and, in case of important persons, they were also formally given Khitab i.e. Muslim names. When one Hira Bairagi of Khargoda became a Muslim, he was given a saropa, and Rs.5 per day were fixed for him. There are many cases when prisoners made during military operations were given no better choice than either accepting Islam or to suffer imprisonment.