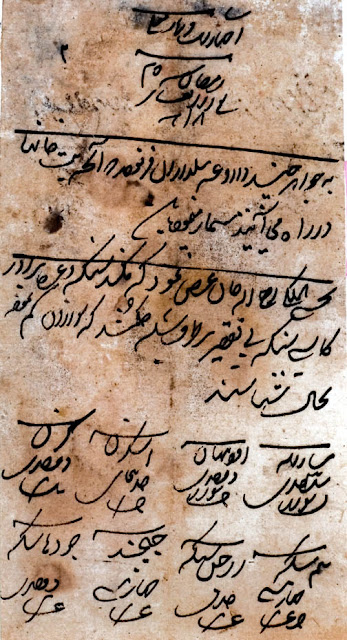 40. ALL THE TEMPLES ON THE WAY TO BE DESTROYED

“The Emperor ordered Jawahar Chand, Darogha of the beldars, that all the temples which would come on his way (to Burhanpur) be demolished.”
Siyaha Akhbarat-i-Darbar,
Julus 25, Ramzan 18 / 21st September 1681.
Commentary:
It may be noted that the order makes no distinction between old and recently built Temples. It is an all comprehensive order to pull down all the Temples which could meet Emperor’s eyes.
The Emperor at this time was on his way to the Deccan after concluding terms of peace with Mewar. Leaving Ajmer on 8th September 1681, he reached Burhanpur on 13th November 1681. Aurangzeb had the regret that the houses and the Temples in the Deccan were exceedingly strong, being built solely of stone and iron. For this reason, as he wrote to Ruhullah Khan, “The hatchet men of the Government in course of my marching do not get sufficient strength and power (i.e. time) to destroy and raze the Temples of the infidels that met the eye on the way, and therefore ordered that “an orthodox darogha” be appointed “who may afterwards destroy them (Temples) at leisure and dig up their foundations.” (Kalimat-i-Aurangzeb, 34 of Rampur MS and f.35a of 1.0.L. MS., in J.N. Sarkar, Aurangzeb, Vol.III, 189).