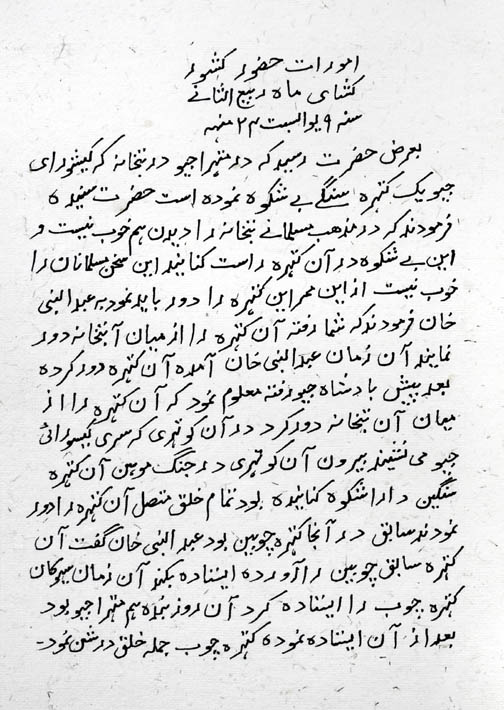 8. EVEN TO LOOK AT A TEMPLE IS IMPROPER FOR A MUSALMAN

‘It was reported to the Emperor (Aurangzeb) that in the Temple of Keshava Rai at Mathura, there was a stone railing presented by ‘Bishukoh’ (one without dignity i.e. Prince Dara, Aurangzeb’s elder brother). On hearing it, the Emperor observed, “In the religion of the Musalmans, it is improper even to look at a Temple and this Bishukoh had installed this kathra (barrier railing). Such an act is totally unbecoming of a Musalman. This railing should be removed (forthwith).” His Majesty ordered Abdun Nabi Khan to go and remove the kathra, which was in the middle of the Temple. The Khan went and removed it. After doing it he had audience. He informed that the idol of Keshava Rai was in the inner chamber. The railing presented by Dara was in front of the chamber and that, formerly, it was of wood. Inside the kathra used to stand the sevakas of the shrine (pujaris etc.) and outside it stood the people (khalq)’.
Umurat-i-Hazur Kishwar-Kashai,
Julus (R.Yr.) 9, Rabi II 24 / 13 October 1666.
Commentary:
Aurangzeb’s solemn observation recorded in his own Court’s bulletin that “In the religion of the Musalmans it is improper even to look at a Temple” and therefore, presentation of a stone railing to Keshava Rai Temple by Dara was “totally unbecoming of a Musalman” casts serious doubts about a few instances of religious toleration and Temple grants attributed to him. Only two years before his long awaited death, he had ordered (1st January 1705) to “demolish the Temple of Pandharpur and to take the butchers of the camp there and slaughter cows in the Temple … It was done.” (Akhbarat, 49-7, cited in J.N. Sarkar, Aurangzeb, Vol.III, 189).