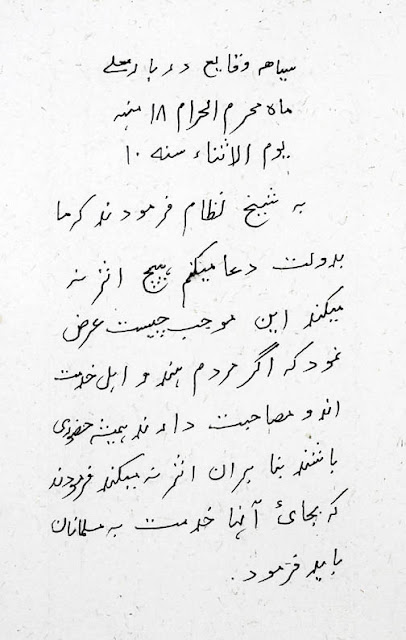 Musalmans to replace Hindu officials as cure for ineffectiveness of prayers.
"The Emperor said to Shaikh Nizam that his prayers were not having any effect. What could be the reason for this ? The Shaikh said, 'The reason is that a large number of Hindus are serving as ahlikhidmat (officials and officers) and as musahibs (courtiers) and they are ever (seen) in the Royal presence, and, as a result, the prayers do not have any effect'. The Emperor ordered that it is necessary that the Musalmans be appointed to serve in place of the Hindus."
Siyaha Waqai Darbar,
Julus (R.Yr.) 10, Muharram 18 / 1st July 1667.
Commentary:
The object of the Emperor's prayers or the nature of the desired result is not mentioned, but it appears that it was the elevation and dominance of Islam, progress of its mission through means, such as jihad, which are very differently regarded by people of other faiths, and the welfare of the Musalmans in particular. The instant impact of the Shaikh’s analysis of the problem and implied advice to Aurangzeb is also indicative of the high degree of influence wielded by this religious class during the reign of Emperor Aurangzeb.