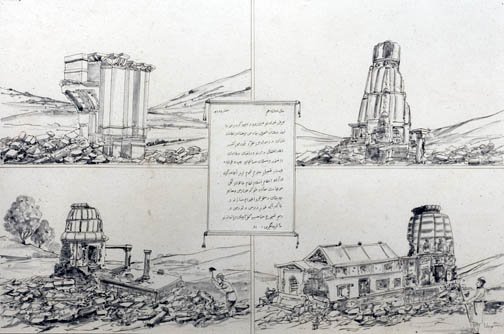 20. GENERAL ORDER FOR THE DEMOLITION OF HINDU TEMPLES

On the 9th April 1669, Aurangzeb “eager to establish Islam, issued orders to the governors of all the provinces to demolish the schools and Temples of the infidels, and, with the utmost urgency, put down the teaching and the public practice of the religion of these unbelievers (Hindus)” (Maasir-i-‘Alamgiri, p.81).
In the sketch above, the artist has shown the destruction of the Temples of Somanath, Jagannath (Puri), Kashi Vishwanath (Banaras)and Keshava Rai (Mathura), which were all highly venerated shrines, as symbolic of Aurangzeb’s ideal of thorough destruction of Hindu Temples. In the centre is a portion of the infamous order of the 9th April issued by him.