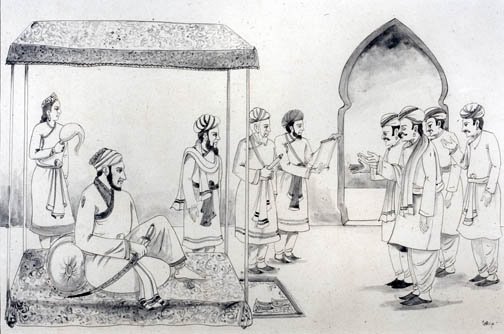 13. AURANGZEB RESTORING THE OFFICE OF QANUNGOSHIP TO HINDU OFFICIALS WHO WERE FORCED TO BECOME MUSALMAN
There are a large number of Akhbarat (Aurangzeb’s Court Bulletins) which mention that either Qanungoi was restored on becoming Musalman, or that a person or persons were appointed Qanungos on accepting Islam, or that they agreed to become Musalman, obviously under pressure or as inducement.
A typical entry in the Akhbarat, such as of R.Yr. 10, Zilqada / April 22, 1667, reads “Makrand etc., in all four persons, became Musalman. The Qanungoi of Parganah Khohri was restored to them. Four Khil‘ats were conferred upon them.” Sir Jadunath Sarkar is right in saying that “Qanungoship on becoming a Muslim”, had become a proverb.
As Qanungo had intimate knowledge of the customs and tenures of the land, he could serve as the best agent for protecting the interests of the Musalmans and in extending influence of Islam in the rural areas. The sketch above shows four Qanungos being restored their Qanungoi on becoming Musalman.