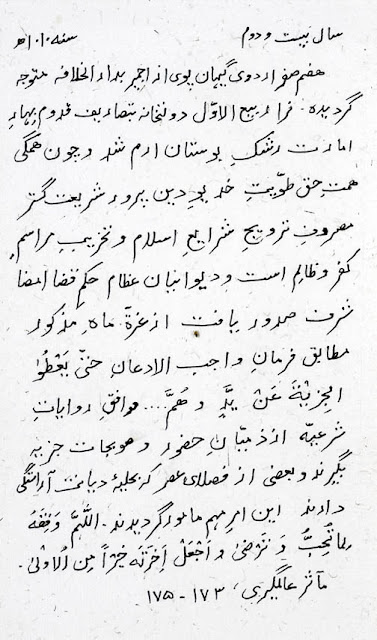 27. Reimposition of Jizyah by Aurangzeb.

‘As all the aims of the religious Emperor were directed to the spreading of the law of Islam and the overthrow of the practices of the infidels, he issued orders to the high diwani officers that from Wednesday, the 2nd April 1679 / 1st Rabi I, in obedience to the Quranic injunction, “till they pay commutation money (Jizyah) out of their hand and they be humbled”, and in agreement with the canonical tradition, Jizyah should be collected from the infidels (zimmis) of the capital and the provinces. Many of the honest scholars of the time were appointed to discharge the work (of collecting Jizyah). May God actuate him (Emperor Aurangzeb) to do that which He loves and is pleased with, and make his future life better than the present’. (Maasir-i-‘Alamgiri, p. 175, Tr. J.N. Sarkar)

Ignoring the Qur’anic injunction that war was to be made on all those who do not profess Islam “till they pay Jizyah out of their hand and they be humbled,” Emperor Akbar had abolished this invidious tax on the Hindus in 1564. Its re-imposition by Aurangzeb in 1679 was an extremely retrogressive step and was greeted by spontaneous protests of the people in general and made Shivaji Maharaj write his famous letter chiding the intolerant and imprudent Emperor for making distinction among his subjects on the basis of religion. The step was likely to bring a spurt in conversions to Islam, especially from the poorer classes, and pacification of the Muslims in general, but Ulama in particular.