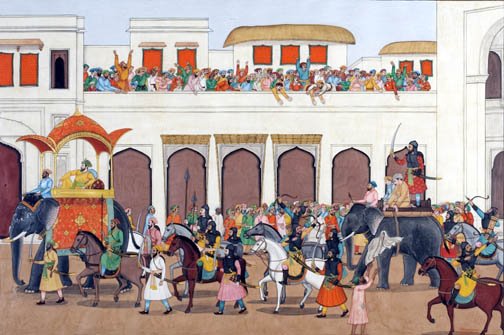 3. CAPTIVE DARA BEING PARADED IN DELHI

The painting above, based on Dr. Bernier’s eyewitness account, shows a captive Dara Shukoh and his son being carried on an elephant on the streets of Delhi, girt round by troops ready to foil any attempt to rescue the prisoner, and led by Bahadur Shah on an elephant. Behind Prince Dara Shukoh is Nazar Beg, their goaler. Dara is shown throwing his wrapper to a beggar who had cried out, “Dara! When you were master, you always gave me alms, today I know well thou hast naught to give.” Describing the scene Bernier writes, “The crowd assembled was immense; and everywhere I observed the people weeping and lamenting the fate of Dara in the most touching language … men, women and children were wailing as if some mighty calamity had happened to themselves.”
The outburst of popular sympathy for Crown Prince Dara Shukoh and the contemptuous response which Aurangzeb had received from the people for his outrageous treatment of his brother made him procure in all haste a decree from the Clerics in his own pay, and had his elder brother beheaded on the charge of apostasy.
This was a sad end of a genuine seeker of truth, translator of the Upanishads, author of many works on Sufi philosophy, and one who could have revived and carried the enlightened policies of his great ancestor Akbar to fulfillment.