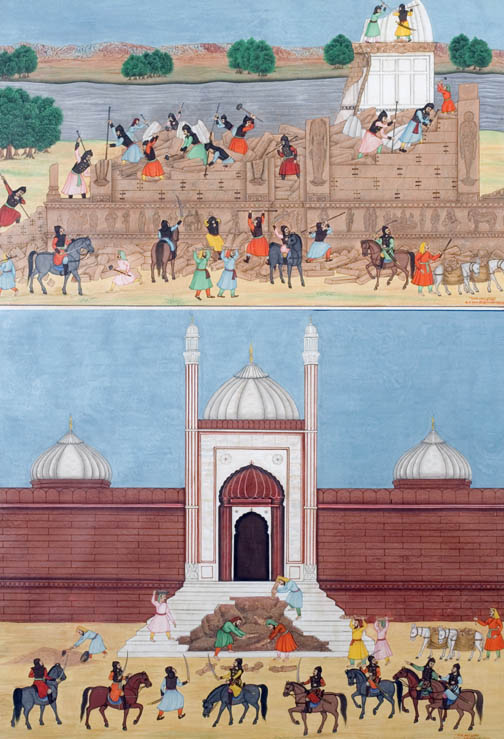 The great Temple of Keshava Rai at Mathura was built by Bir Singh Deo Bundela during Jahangir’s time at a cost of thirty-three lakhs of rupees. The Dehra of Keshava Rai was one of the most magnificent Temples ever built in India and enjoyed veneration of the Hindus throughout the land. Prince Dara Shukoh, who was looked upon by the masses as the future Emperor, had presented a carved stone railing to the Temple which was installed in front of the deity at some distance; the devotees stood outside this railing to have ‘darshan’ of Keshava Rai. The railing was removed on Auranzeb’s orders in October 1666.
The Dehra of Keshava Rai was demolished in the month of Ramzan, 1080 A.H. (13th January – 11th February 1670) by Aurangzeb’s order. “In a short time, by the great exertion of the officers, the destruction of this strong foundation of infidelity was accomplished and on its site a lofty mosque was built at the expenditure of a large sum.” To the author of Maasir-i-‘Alamigiri, the accomplishment of this “seemingly impossible work was an “instance of the strength of the Emperor’s faith.” Even more disgraceful was transporting the idols to Agra and burying them under the steps of the mosque of the Begum Sahib “in order to be continually trodden upon.” He even changed the name of the sacred city of Mathura, held in highest respect by the Hindus since time immemorial, to Islamabad, revealing his utter insensitivity towards their feelings.
The paintings above show the demolition of the great Temple on Aurangzeb’s orders in progress and subsequent uncivilized conduct towards the idols.