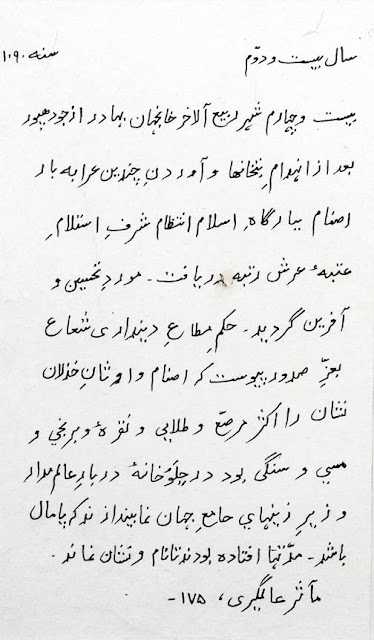 30. IDOLS TO BE CAST UNDER THE STEPS OF JAM'A MASJID

Aurangzeb orders cart-loads of idols brought from Jodhpur to be cast under the steps of Jam'a Masjid.
“On Sunday, the 24 Rabi II / 25th May 1679, Khan Jahan Bahadur came from Jodhpur, after demolishing the Temples and bringing with himself some cart-loads of idols, and had audience of the Emperor, who highly praised him and ordered that the idols, which were mostly jewelled, golden, silvery, bronze, copper or stone, should be cast in the yard (jilaukhanah) of the Court and under the steps of Jam'a Masjid, to be trodden on. They remained so for some time and at last their very names were lost.”
(Maasir-i-‘Alamgiri, p. 175, Tr. J.N. Sarkar)
Commentary:
There was no limit to the destructive conduct of the Muslim troops in Marwar during the war which started in 1679 following the resumption of Marwar. Aurangzeb’s handling of the situation after the death of Maharaja Jaswant Singh in the Kabul Subah in 1679, rekindled in his heart the dormant fire of vengeance towards the Maharaja, and his whole plan was to eliminate the Rathors as a major power in Rajputana. The treatment of the idols brought from the Temples of Marwar showed the level of degradation to which people can descend under the influence of religious orthodoxy, but for an Emperor whose majority of the subjects respected and worshipped these idols, it was an unpardonable act and reflected poorly on his religious beliefs.