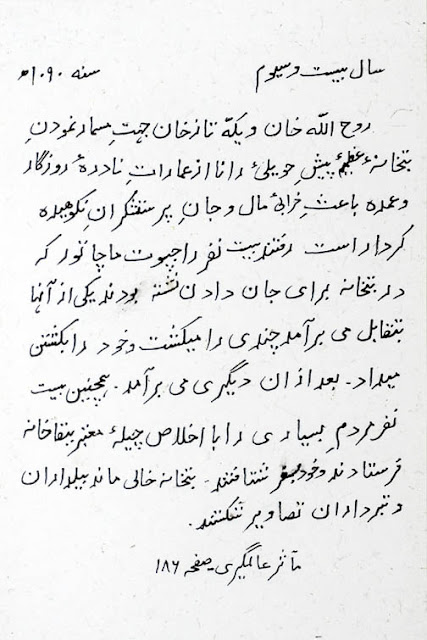 Demolition of Jagannath Rai (Jagdish Temple), Udaipur, and its brave defence. R.Y. 23rd of Aurangzeb’s reign (26th September 1679 – 14th September 1680).
“Ruhullah Khan and Ekkataz Khan went to demolish the great Temple in front of the Rana’s palace, which was one of the rarest buildings of the age and the chief cause of the destruction of life and property of the despised worshippers. Twenty machator Rajputs were sitting in the Temple vowed to give up their lives; first one of them came out to fight, killed some and was then himself slain, then came out another and so on until every one of the twenty perished, after killing a large number of the imperialists including the trusted slave, Ikhlas. The Temple was found empty. The hewers broke the images.”
(Maasir-i-‘Alamgiri, p. 186, Tr. J.N. Sarkar)
Commentary:
The great Temple of Jagannath Rai (Jagdish) was built by Maharana Jagat Singh at a cost of several lakhs of rupees. The pratishtha ceremony of the Temple was held on 13th May 1652 on a grand scale.
It was a Vishnu Panchayatan Temple. In the centre was the main Temple of Vishnu and in the parikrama, in the four directions, were those of Shiva, Ganapati, Surya and Devi. The Jagannath Rai Prashasti gives details about the Temple, including the names of the architect etc.