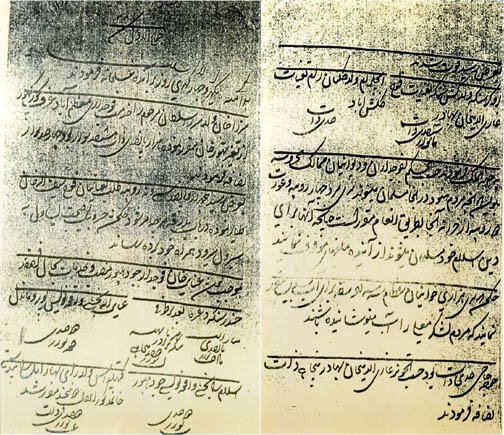 43. RS. 4 TO A HINDU MALE AND RS. 2 TO A HINDU FEMALE ON CONVERSION
“The Emperor ordered Jumadat-ul-Mulk to send hasbu 'l-hukm to all the Faujdars and the Diwans of the Provinces of the Empire that Rs. 4/- for each Hindu male and Rs. 2/- for each Hindu female are being fixed (by him) to be given by way of inam to them for accepting Islam; this amount should be paid from the treasury of the place (to avoid delay). Those who accept the Muhammadan faith are to be paid accordingly in future.”
Siyaha Akhbarat-i-Darbar-i- Mu‘alla,
Julus (R.Yr.) 28 Jamadi I, 12 / 7th April 1685.
Commentary:
The amount offered as an inducement for conversion was substantial and amounted to almost one month’s wages of a worker in case of a Hindu male.
The document forms one of the most unabashed statement and the severest indictment on the methods adopted in spreading Islam in India, and this was being done even after more than four hundred years after the establishment of Muslim rule in India (c. 1200 A.D.)!