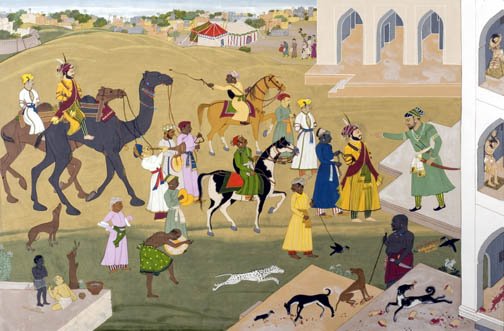 46. THE EXECUTION OF RAJA SHAMBHAJI (SON OF SHIVAJI) ON AURANGZEB’S ORDERS AFTER CAPTURE (FEBRUARY, 1689)

Succeeding his great father Chhatrapati Shivaji Maharaj in April 1680, his elder son Shambhaji continued the fight against the Mughals most spiritedly for the preservation and also extension of Swajajya.
Unfortunately, a single but grave mistake and over confidence in his own safe and secure position at Sangameshwar, nestling amidst the Western Ghats, led to his chance capture along with Kavikalash and a number of other Marathas who were with him.
On the 15th February 1689, Shambhaji and Kavi Kalash were brought to the Imperial camp dressed as buffons with long fool’s caps and bells placed on their heads, mounted on camels, with drums beating, with thousands of onlookers lining the roads. Aurangzeb was sitting in full darbar, and, at the sight of the prisoners, “descended from the throne and kneeling down on the carpet bowed his head to the ground in double thankfulness to the Giver of this crowning victory.” Shambhaji spurned the offer of life and loosened his tongue in abuse of the Emperor. That very night his eyes were gorged out and next day the tongue of Kavi Kalash was cut out. The Musalman clerics decreed that Shambhaji should be put to death.
After undergoing a fortnight of torture and insult, the captives were put to a cruel and painful death on the 11th March, their limbs being hacked off one by one and their flesht hrown to the dogs. Their severed heads were stuffed with straw and exhibited in all the chief cities of the Deccan to the accompaniment of drum and trumpet (Maasir-i-‘Alamgiri, 320-25; Muntakhab-ul-Lubab, 386-88, Sarkar, Aurangzeb, IV, pp.340-44).
In the painting above, the entire sequence of events after Shambhaji’s arrival in the camp, his cruel death and barbaric manner in which his dead body was dealt with have been brought out alive. The courageous manner in which Shambhaji braved death made him a martyr in the eyes of the people who preferred to forget his earlier mistakes and actions.