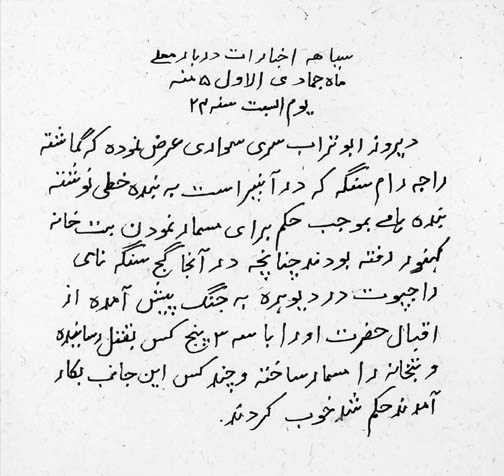 45. Demolition of the Jagdish Temple at Goner (Amber).

Yesterday, Abu Turab submitted to the Emperor during the march that the gumashta of Raja Ram Singh had written to him from Amber that in compliance with the orders, His Majesty’s servants had gone to demolish the Temple at Goner. A Rajput, Gaj Singh, by name, had taken position inside the Temple. A severe fight took place in which, by the iqbal of His Majesty, he along with three to five men were killed. The temple was demolised. A few men from this side also lost their lives. The Emperor said “Well done!”’

The Temple of Jagdish at Goner, which lies about 20 Km. from Jaipur, is one of the most important Temples in the region. It is believed that the murli (idol) of Lakshmi Narayanji was found by one Devadas during Akbar’s time. Devadas was a poor Brahman farmer from Sivad and it is said that the Lord himself appeared before him and asked him to go to Goner and excavate the idol and install it in a Temple. Tradition is that when the Mughal troops attacked the Temple during the reign of Aurangzeb, one Sujan Singh Pachyanot with his men resisted and saved the Temple. However, as the two Akhbarat exhibited here show, Gaj Singh Rajput and his men though fought till the last breath, they could not save the Temple which was demolished.

The Temple seems to have been built soon after 1710 when Sawai Jai Singh regained his patrimony of Amber from the Mughal Government.