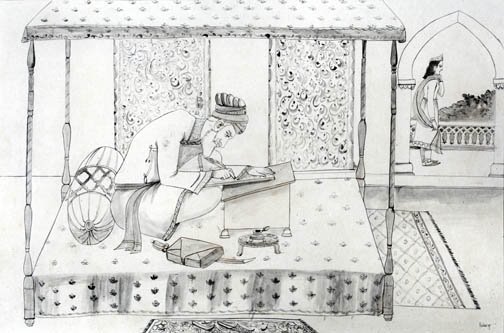 48. AURANGZEB’S WILL
The above sketch shows Aurangzeb, now about 89 years old, writing his Will.


“Praise be to God and blessing on those servants of Him who have become sanctified and have given satisfaction to Him. I have some [instructions to leave as my] last will and testament:

FIRST - On behalf of this sinner sunk in iniquity [i.e. myself] cover [with an offering of cloth] the holy tomb of Hasan (on Him be peace), because those who are drowned in the ocean of sin have no other protection except seeking refuge with that Portal of Mercy and Forgiveness.

SECOND - Four Rupees and two annas, out of the price of the caps sewn by me, are with Aia Beg, the mahaldar. Take the amount and spend it on the shroud of this helpless creature. Three hundred and five Rupees, from the wages of copying the Quran, are in my purse for personal expenses. Distribute them to the faqirs on the day of my death.

THIRD - Take the remaining necessary articles [of my funeral] from the agent of Prince Alijah; as he is the nearest heir among my sons, and on him lies the responsibility for the lawful or unlawful [practices at my funeral]; this helpless person (i.e. Aurangzeb) is not answerable for them, because the dead are in the hands of the survivors.

FOURTH - Bury this wanderer in the Valley of Deviation from the Right Path with his head bare, because every ruined sinner who is conducted bare-headed before the Grand Emperor (i.e. God), is sure to be an object of mercy.

FIFTH - Cover the top of the coffin on my bier with the coarse white cloth called gazi. Avoid the spreading of a canopy and uncanonical innovations like [processions of] musicians and the celebration of the Prophet’s Nativity (maulud)

SIXTH - It is proper for the ruler of the kingdom (i.e. my heir) to treat kindly the helpless servants who in the train of this shameless creature [Aurangzeb] have been roving in the deserts and wilderness [of the Deccan]. Even if any manifest fault is committed by them, give them in return for it gracious forgiveness and benign overlooking [of the fault].

[SEVENTH, EIGHTH, NINTH - His assessment of the Irani, Turani, and the Saiyid nobles and his advice how to treat them keeping in mind their qualities and weaknesses.]

TENTH - As far as possible the ruler of a kingdom should not spare himself from moving about; he should avoid staying in one place, which outwardly gives him repose but in effect brings on a thousand calamities and troubles.

ELEVENTH - Never trust your sons, nor treat them during your lifetime in an intimate manner, because, if the Emperor Shah Jahan had not treated Dara Shukoh in this manner, his affairs would not have come to such a sorry pass. Ever keep in view the saying, ‘The word of a king is barren’.

TWELFTH - The main pillar of government is to be well informed in the news of the kingdom. Negligence for a single moment becomes the cause of disgrace for long years. The escape of the wretch Shiva took place through [my] carelessness, and I have to labour hard [against the Marathas] to the end of my life, [as the result of it].

Twelve is blessed [among numbers]. I have concluded with twelve directions.

There is another will of Aurangzeb in India Office Library MS.1344,f.49b (Sarkar, Aurangzeb, Vol.V, 201). Its chief interest lies in the suggested method of partitioning the empire among his three surviving sons.